Find and temporarily repair short or faulty circuits in the shop or on the road. 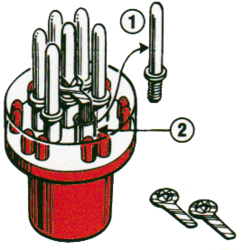 In the shop, use the Circuit Chaser® to test your cable, tractor and trailer. On the road, it provides a fast and safe temporary repair by allowing you to isolate a fault in the tractor or cable, by-pass it, putting power to the required circuit on the trailer. With Circuit Chaser you are back on the road in minutes.

By-Pass Feature: To by-pass a short or faulty line until permanent repairs can be made, plug the Circuit Chaser into the cable end nearest the trailer, making sure that the pins point toward the tractor. Identify the faulty circuit. (1) Unplug the unit and unscrew the pin on the line next to the unlit LED, to isolate the fault. (2) Install the flat brass jumper strap over the center pin and bend the tail down into the hole where the pin was removed. Plug the cable and attached Circuit Chaser into the trailer and you can proceed down the road. If all the lights do not come on, follow the above procedure for the other faulty circuits. The Circuit Chaser may also be used to by-pass a fault in the first trailer, when pulling doubles. In order for the by-pass feature to work: Power must be available on the center pin. Pins must point toward the tractor. The Circuit Chaser works best with connectors that are 1.5 inches in depth.

Trouble Shooting: If after you have placed the unit in the line by-passing the faulty circuit and the light on the trailer still does not work, it is either: a burned out bulb or the line on the trailer is severed. The Circuit Chaser will not fix either of these situations. It will also not replace the emergency or turn signal flashers. Circuit Chaser is fully guaranteed for one year against defective materials and workmanship.

WARNING
Some of these products contain a chemical known to the State of California that
could causecancer, birth defects and/or other reproductive harm. More info here.